In the past, we have already introduced some of our users to you. One was ElisaSanacore who created atmospheric mixes for her paintings, the other was now named Kyrianne365 who specialized on fantasy and relaxing atmospheres.

This time, we want to introduce to you a user who created a plethora of ambient noise mixes for an online roleplay group: MonicaMcFLYx

Sounds For Your RPG – Salem Magic

Before showing you the beautiful sceneries MonicaMcFLYx created, maybe we should explain what kind of RPG these mixes were created for.

What Is An Online RPG?

After a little bit of spying and googling, we stumbled upon the Tumblr of Salem Magic. Browsing the page, we found all the location our Ambient-Mixer user had created atmospheres for; clubs and bars, beaches and bed & breakfasts, drive-in theaters and more. It was quite obvious that we came to the right spot.

But what kind of RPG is Salem Magic? 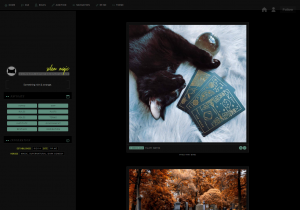 In general, RPG stands for Role Play Game. It is most commonly associated with either so-called pen & paper games like Dungeons & Dragons or with different video games of the genre. However, the online community has come to create a whole other way of roleplaying. These roleplays can be found across many platforms; personal blogs, writing communities, Twitter and – as in the case of Salem Magic – Tumblr. They are, most commonly, referred to as “online RPGs”.

These roleplays can play in different time zones and places of the real and non-existing world. Themes and topics, plots and storylines are only limited by imagination. Roleplayers that are interested in a particular plot follow each other on these platforms and start writing, either short conversations like anyone have on the internet, or generating intricate plotlines in so-called written paras (short for paragraph) that read like little stories.

Many RPGs take a lot of time and effort to create a whole world for their players to play around in. Characters, rules, locations, they all give an RPG the feel of being more real – and thus making it easier to write. We at Ambient-Mixer know that ambient mixes can provide some great inspiration for writers, and roleplay writers make no difference.

But it was user MonicaMcFLYx that really went full in with this idea. Looking at her profile reads like an audible city tour through the locations of Salem Magic. Almost every location of the RPG has an atmosphere dedicated to it.

Here are some of our favorite – and it was not easy to choose!

These atmospheres, and of course the others created for the RPG as well, show perfectly how the right audio background can make sceneries come to life. It doesn’t matter if you are writing your own story or book, fanfiction or for an (online) RPG. With the right background sounds, all your stories can come to life!

Ambient Noise For & About Magic & Witchcraft