No matter what kind of music you listen to, there is always that one song that gets stuck in your head for a long time. Some people can listen to the same song over and over, again and again, without ever getting tired of it. But just what makes us love a song so much? Why do certain tunes get stuck in our heads and hearts? There are several factors as to why this may happen.

Whenever a song or a fragment of a tune, gets stuck in your head and you keep singing it, they call it the ‘earworm’ effect. According to Elizabeth Margulis, who is the director of the Music Cognition Lab at the University of Arkansas, “Bits of a chorus of a song, replay like a stuck loop in your head.” Elizabeth is also the author of the book  “On Repeat: How Music Plays the Mind.” Some songs are structured to contain catchy phrases or tunes. These characteristics or patterns, lead to listeners remembering or singing that phrase or tune repeatedly.  In other studies, about 91% of people reported having an earworm effect almost once a week. A quarter of those studied had the effect for more than once a day. Another interesting fact and statistic is that about 90% of the music we listen to, tends to be music we have heard before.

Although there has been some research done as to why certain tunes get stuck in our minds, what triggers it remains a mystery. Still, repeating a song or continuing to play it over and over again, does a few things for us. Doing this actually gets us to mentally imagine as if we are singing the song ourselves. This may explain why so many people belt out their favorite songs when they are in the shower or alone. Many people will perform chores around the house while listening to their favorite songs and sing right along to each tune. Others, will end up going a step further and sing their favorite tunes in bars or gatherings via Karaoke. 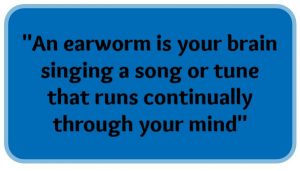 Scientist believe we like things simply because we have heard them again and again. The music industry has been taking advantage of this for decades. That is why so many artists, producers and people in the music industry push DJ’s and radio stations to play certain songs. The ability to brainwash listeners into liking them by constant repetition works. Nevertheless, the song or tune still needs to be good at the very least, in order to get us to like it. When the song or tune is great, then it really gets stuck in our heads and ends up becoming one of our favorites.

You may also enjoy these Great Inspirational Music Quotes

Another reason we tend to listen to certain songs over and over again is due to emotions. That helps to explain why some love songs become so popular. When a person is going through some emotional difficulty, music helps to soothe their pain. In the same way, when someone is in love, there could be a song which tells how she or he may be feeling at that moment. Most people who are ‘brokenhearted’ tend to listen to songs they may have heard during their relationships. Others will listen to a tune which lyrics reflect what that person may be going through at the time.

In the end, no matter what the reason may be for us listening to a song continually, the results are the same. Musical repetition is at the core of why we love music so much, and why music means so much to us.

What Is Music Without Words Called?

Horoscope Signs And Their Music Preferences