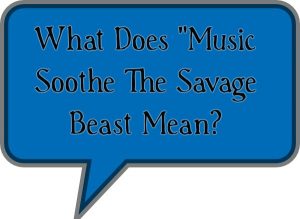 There is a very popular phrase or quote which says “Music soothe the savage beast.” You can find millions of searches related to the phrase. There are also several variations within those searches. Some people even think that the term comes from the bible.

But just what does this idiom mean? Where was it first coined and by whom? For music lovers, this has been a quote which they have heard used often. However, it is a phrase that is typically misquoted or used in part, incorrectly. Also, not used entirely since the entire actual correct quote, is much longer.

The Origin of The Phrase

One of the most interesting facts about the phrase “Music soothe the savage beast” is that it is actually wrong. The correct phrase is ‘breast’ and not ‘beast,’ as so many think it is. The actual quote or phrase was originally coined by William Congreve. He was a poet of the restoration period and an English playwright. 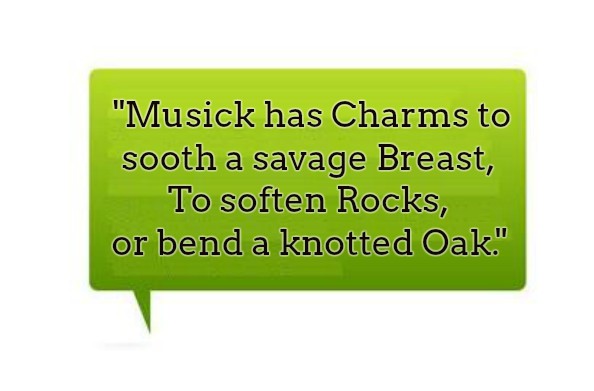 The actual phrase derived from the tragic playwright “The Mourning Bride” which William wrote in 1967. The quote reads “Musick has Charms to sooth a savage Breast, To soften Rocks, or bend a knotted Oak.” As you can see, there is no ‘beast’ in the quote, but rather ‘breast.’

No one really knows when part of the phrase was changed from breast to beast, or by whom. What is known is that it ultimately became very popular. The meaning for ‘Music soothe the savage breast’ quote can be interpreted as chest or heart. That is likely what William was referring to when he wrote his playwright.

Still, as time went by, people began to incorrectly use the quote in numerous instances. As it is today, the phrase is misquoted wrongly in many places. The literal meaning of the incorrect quote is in reference to the power of music. Whoever began to misquote the phrase, wanted to say that music has the power to soothe even the most savage beast in the world. In a way, even though the quote is incorrect, it does make some sense. That’s because breast – as it was used back then – referred to feelings, emotions and heart.

Better Than The Original Quote?

The next time you see someone using the phrase incorrectly, keep them honest. Let them know what the actual phrase is and by whom it was written. Or you can simply let them keep thinking it is what they think. In reality, no matter what, this quote is very powerful. Music is one of the best ways to calm our heartaches, pain and emotions. Music has the power to bring smiles to people’s faces and change the world. It may even tame a few wild animals and beasts. In a way, although the quote has been used incorrectly, it is still a great phrase. Some even argue that it makes more sense than the original.

How To Use Music To Soothe Anxiety

Soothe your Baby to Sleep with Music

Music And The Effects It Has From Advertising