If you like movies, you have surely heard the term film noir at least once before. Even when you haven’t watched a film noir movie itself, you surely came across it still. Other movies often homage or parody their tropes. Likewise, images or scenes are popular to be used in advertising or other media displays.

What’s so fascinating about the film noir genre? And what is film noir in the first place? This is what we want to talk about in this article. On Ambient-Mixer.com, you can also find many film noir-inspired ambient noise mixes. For some great examples, scroll to the bottom of this article.

To find out where the fascination with film noir comes from, we have to look at what defines the genre.

Quite literally, film noir is French for “black movie”. This can be attributed to the black and white and usually dim visuals, but also to the darker and more raunchy and sexualized themes. The term itself became popular way after the releases of the movies themselves. Only in the 1970’s, film noir was used more frequently. However, it is still debated whether it is a whole genre of movies in itself.

But not only movies released in the 40’s and 50’s are regarded as “noir” nowadays. Movies from later time periods that heavily play and use the image of film noir are referred to as neo-noir. Some of the most well-known movies of this kind are probably Blade Runner and Body Heat (1980s), Basic Instinct and L.A. Confidential (1990s), and In Bruges and Sin City (2000s).

Now that we had a look at what supposedly makes a movie a film noir, let’s check out some of the most iconic movies that carry the film noir label. 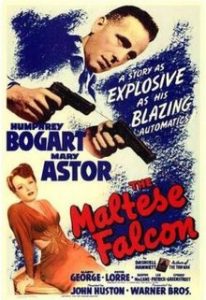 The movie was based on a book of the same name. In 1941 San Francisco, private investigator Sam Spade – portrayed by Humphrey Bogart – is approached by a woman that apparently surrounds herself with dangerous men. The death of several people, including the Spade’s partner, ensues and he is caught in a web of mystery, crime, and deceit. And in the center of it all, a high-prized statuette of a Maltese Falcon.

Dave Bannion is a cop investigating in a crime syndicate that supposedly has control over the police force. After the death of his wife and a suspicious silence by several colleagues Bannion is convinced that the situation even worse than expected. Teaming up with the spurned girlfriend of one of the gangsters, he goes on a rampage of (partly murderous) vengeance.

A classic by Alfred Hitchcock. Two strangers meet on a train and make a plan. While one wants to off his father, the other wants to off his wife to get with his affair. Thus, the two men plot to exchange murders to get better alibis. Unfortunately, while one of them is determined to pull off their crazy scheme, the other regarded it all as a harmless joke. 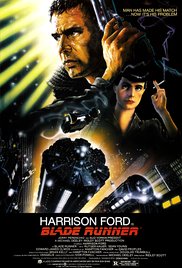 Blade Runner is a movie that falls into the category of neo-noir, since it was produced long after the film noir time period (namely in the 1980’s). In this futuristic science-fiction movie, Harrison Ford plays a former police officer who hunts human clones known as replicants. The themes of noir and sci-fi compliment each other greatly in the cyberpunk atmosphere of the movie.

While the movie itself dates from 1997, the scenery is set in the United States of the 1950s. It is widely regarded as a great tribute to the true film noir. In the movie, three detectives that couldn’t be more different, take on the corruption and murder all around Hollywood and the brutal police force itself.

Atmospheric background sounds with a film noir influence are all over the Ambient Mixer categories. Thus, the easiest way to get your dose of noir is to use the search function.

But what makes a great film noir ambience? A thing that almost all have in common is moody Jazz music as well as a city-setting. Nature lovers will not get their share here, unfortunately. But there are pubs, clubs, dark city streets, rain, and investigators’ offices. And, of course, the cyberpunk theme of neo-noir is all-present as well.

We also created a Spotify Playlist that goes just perfectly with these ambiences! Check it out here.

Check out these excellent examples below.

Are you a fan of Film Noir? Let us know!