How would you feel when you pay a service to get rid of the ads and yet you’re still bombarded with ads anyway? Well, many Spotify were unhappy when it happened to them. The music streaming service plastered everyone’s homepage and playlist cover with Drake and more Drake.

Some of you may remember that back in 2014 Apple pulled a similar stunt. No one was asking for it, but Apple went ahead and put U2’s new album in everyone’s iTunes folder. Tim Cook had the gall to call the move as an incredible move. What so incredible about it was something Cook only knew. 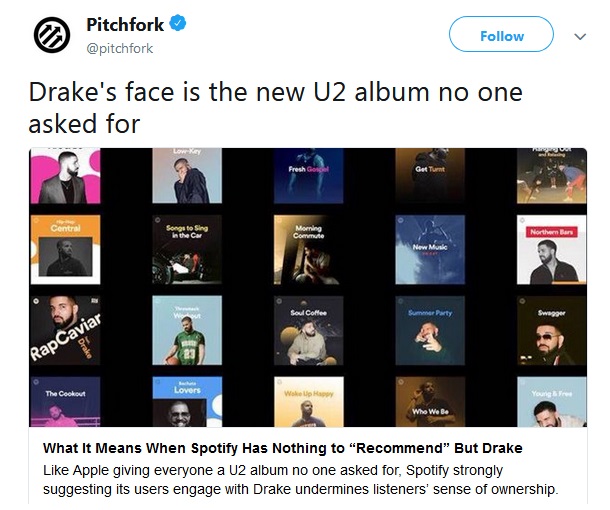 Apple users were appalled because Apple could literally put anything they want into their customers’ iTunes folder whether they like it or not. Apple did have that clause in the user agreement implying that they are allowed to do this, but it was still scary that they actually went with it.

So why did Spotify promoted Drake’s new album so heavily?

Money was certainly involved in this. It’s logical for artists to promote their new album on the largest music streaming service on the planet. After all, whether you’re a popular star or a fresh bud in the music industry, using Spotify is one way to promote your music online.

The problem was that people who had paid for Spotify did so because they did not want ads in any shape and form. People were also upset because Spotify downright ignored their music preferences. 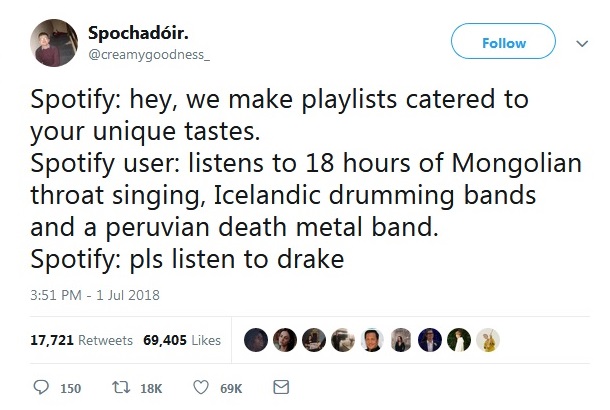 Sure, Spotify didn’t embed any Drake’s songs in people’s music but when they suggested Drake with no respect of its users’ music history and preferences, that’s certainly sloppy advertising plain and simple.

Did the promotion work?

The numbers showed that it did. Drake’s new album was streamed more than 10 million times per hour during the weekend of its release. Supposedly, it broke the streaming record for a new album in just three days.

What can you do about it?

If you’re a paid user and you feel annoyed by Drake’s new album ads, you can always ask for a refund. In fact, many people did receive refunds from Spotify. The company did not specifically apologize for what happened but you can still get your money back.

So, we hate Drake now?

That said, people who were upset about it has the full right to be mad. They paid for an ad-free service and Spotify slapped them with ads. However, many Spotify users didn’t even realize what’s going on until someone pointed it out for them. Some noticed the suggestions and ignored it the way they ignored any other ads.

Have You Stopped Looking For New Music?